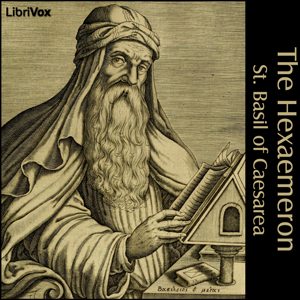 by
Basil of Caesarea

LibriVox recording of The Hexaemeron, by Basil of Caesarea. Read by Jonathan Lange. The Hexaemeron is the title of nine homilies delivered by St. Basil on the the cosmogony of the opening chapters of Genesis. When and where they were delivered is quite uncertain. They are Lenten sermons, delivered at both the morning and evening services, and appear to have been listened to by working men. (Hom. iii. 1) Some words in Hom. viii. have confirmed the opinion that they were preached extempore, in accordance with what is believed to have been Basil's ordinary practice. Internal evidence points in the same direction for though a marked contrast might be expected between the style of a work intended to be read, like the De Spiritu Sancto, and that of the orations to be spoken in public, the Hexaemeron shews signs of being an unwritten composition. In earlier ages, it was the most celebrated and admired of Basil's works. Photius (Migne, Pat. Gr. cxli) puts it first of all, and speaks warmly of its eloquence and force. As an example of oratory he would rank it with the works of Plato and Demosthenes. (Introduction by Nicene Post-Nicene Fathers, Series II, Vol. VIII) For further information, including links to online text, reader information, RSS feeds, CD cover or other formats (if available), please go to the LibriVox catalog page for this recording. For more free audio books or to become a volunteer reader, visit LibriVox.org. Download M4B (132MB)

Uploaded by librivoxbooks on July 4, 2011